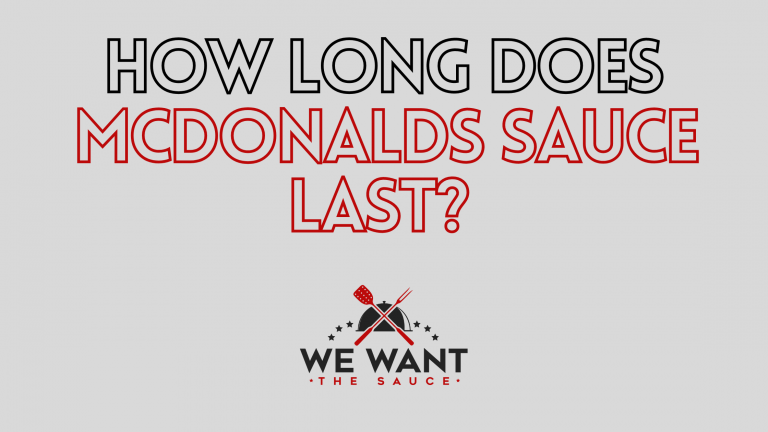 You’ve taken home some sauce packets from McDonalds, but now you’re wondering – how long will they last. Can you store these aware for a rainy day, or keep some for an extended period of time? Here is what you are going to want to know.

So, how long does McDonalds sauce last? McDonalds sauces typically last for 2-3 months, although may last longer depending on the sauce. Equally, there may be a best-before date printed onto the packaging which you can reference. How, when, and where the sauce is stored will all impact the degradation in the quality of the sauce.

Not what you wanted to hear, right?

And sometimes, you may not even be able to find any dates on the packet itself.

And if that’s the case, you are going to need to check the sauce before you eat it. But more on that later (so do keep reading).

For now, all you need to know is that while it can be tempting to hoard McDonalds sauce – there really is no need.

There are plenty of McDonalds restaurants around to pick up some fresh new sauces – just ask and they will be happy to provide.

But you may not even need to do that.

Your sauce may still be good to eat.

It does depend on the sauce in question, and how it has been preserved.

McDonalds sauces do expire; they will eventually go bad and become inedible. That being said, some sauces will naturally last much longer than others due to the ingredients used.

In fact, the expiration dates are typically printed onto the large box the individual packets are delivered to the restaurants in.

Sometimes they are on the packets too, but that’s not always the case.

And if they’re not, then you’re probably wondering when each sauce will roughly expire. At least, a rough estimate

Now, consider this from the date of packaging. Or close to when you picked them up from the McDonalds:

Now, consider that these are just estimates based on the ingredients used in each of the sauces.

Some may not last as long or may last longer than this.

It really does depend on context.

Either way, McDonalds sauces do expire.

And when they do you will notice the following…

How To Tell If McDonalds Sauce Have Gone Bad

The best ways to tell if McDonald’s sauces have gone bad is to look for changes in the smell, consistency, or taste when the sauce is opened.

So you are essentially looking for a change in the quality.

Firstly, you should carefully open the sauce. Just as you normally would.

But before spreading it, give the sauce a smell.

Does it smell as the sauce typically does? (when fresh).

Or are you getting overly pungent or sour notes?

Next, simply look at the sauce and see if there are any changes to the consistency.

Is it lumpier, or thicker? What about the color?

Any changes again imply the sauce has gone bad.

Now just consider that you need to be comparing the sauce back to a fresh McDonalds version.

So if you haven’t eaten this sauce before, or simply do not know what it should look and smell like – it’s probably best to discard it.

Otherwise, if you are happy your sauce passes these tests – you have your final one to complete.

How does it taste – is it as it should or what you would expect?

If so you should be okay to proceed in eating it all.

Otherwise, you guessed it. Chuck it away.

In fact, if you are in any doubt, or perhaps the package looks damaged – just throw it away.

Can You Refrigerate Mcdonalds Sauces?

You can refrigerate McDonalds sauces, and this is likely to extend their shelf life. That being said, they were designed not to be refrigerated, so you do not necessarily have to if you intend on eaten them quickly.

In fact, if you were to ever see how McDonalds sauces are stored in restaurants, you would get a good understanding of the best way to store them.

Ensuring they are kept tightly sealed, away from light, air, and humidity.

That’s the key to properly storing these sauces.

Of course, you can refrigerate them should you want to.

In fact, it is advised if you wanted to keep them a little longer.

But just be aware, that this is not technically necessary.

Or, all McDonalds restaurants would be doing it themselves.

That’s what you can hopefully expect from your packet(s) of McDonalds sauces before they start to degrade.

For most of them, at least.

As a general rule of thumb, sauces that contain dairy do not last as long – those that contain vinegar should last a little longer.

But even after you’ve had these packets a while, whether you notice a change, or whether they become inedible – well that’s going to come down to preference.

They shouldn’t not make you sick, but it’s generally not worth the risk.

They simply won’t be as nice either.

And as most McDonalds restaurants give these away pretty freely, why not just swing by and pick some more up. Or, pick up a few more on your next outing.

Just don’t keep them so long next time!