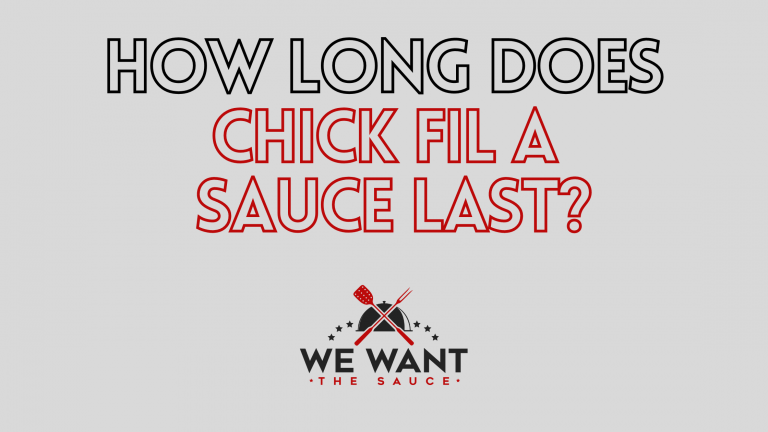 Have you purchased a bottle of Chick Fil A sauce, or have taken home several packs from your recent outing to stockpile for later? Wondering how long they will last you and when you need to use them up by? Well, here is everything you are going to want to know.

So, how long does Chick Fil A sauce last? Chick Fil A bottled sauce comes with a ‘best-before-90-days’ date. You can check the product packaging to find it. However, individual packets of this sauce may only last 7-14 days. While this sauce can be eaten after this time, it may not taste as nice and the quality may have degraded.

How the sauce has been stored will generally impact how long it preserves.

That’s why the major factor of how long this sauce lasts depends on whether we are talking about the bottled, or packet version.

But more on this in due course.

Nevertheless, the beauty of Chick Fil A is that getting hold of their sauces is not difficult.

You can quite readily pick up a few extra pots in the restaurant or even buy a larger bottle; many participating retailers stock it including Amazon!

And boy does it taste good.

But just because it is easy to get does not mean you shouldn’t look after your sauce nor expect it to last.

So let us now look at what to expect in regards to shelf life, maximizing it, and what to look out for when it does come to spoiling!

How Long Is Chick Fil A Sauce Good For

Besides, it is only the large bottled versions of the sauce that actually has a best before date printed on them.

You won’t find this on the individual packets.

Probably because they are designed to be used quickly – in restaurant.

Whereas the bottled versions are specifically designed to last and preserve, for much longer.

In fact, one customer over at Reddit mentioned that they kept a few individual packets for future use.

They found they spoiled quickly. Much faster than you can expect with the bottled version.

Here are their conclusions:

But how can you tell that this sauce has “gone bad”? Let’s find out!

How To Tell Chick Fil A Sauces Have Gone Bad

So quality is the thing to check.

There is nothing necessarily stopping you from using the sauce beyond its ‘best-before date’ or even if you have had a packet for an extended period of time.

But would you want to?

You can easily get hold of several packets next time you are eating in a restaurant, or simply buy a new bottle off Amazon.

But, assuming you have some Chick Fil A sauces in front of you – what can you do?

Well, first and foremost, give the sauce a smell.

Does it smell as expected?

Next, how does it look?

Is it thicker; what about the color.

Remember, you need to be mentally comparing this back to the original, brand new, and fresh version of the sauce.

Then lastly, if you are feeling brave – try a little.

Does it taste nice, or what you expect it to taste like?

If you don’t know or have had your sauce a while, it’s probably best to throw it away and get some more!

Do You Need To Refrigerate Chick Fil A Sauces?

You do not necessarily need to refrigerate Chick Fil A sauces, although it is recommended. They generally last much longer when stored in this way.

For instance, the individual packets of Chick Fil sauces you get in restaurants are not refrigerated.

However, the bottled versions of the sauce have stated explicitly on the packaging that it is best to refrigerate the bottle after opening.

Perhaps this is why the individual packets only last a few days?

Chick Fil A sauce certainly has a shelf life.

But how long really does depend on whether you have the bottled version or individual packets.

Nonetheless, you should be able to quite easily tell when this sauce has spoiled.

While this sauce may not make you sick if you do eat some past its best – it just won’t be anywhere near as good.

So, do replace them if need be.