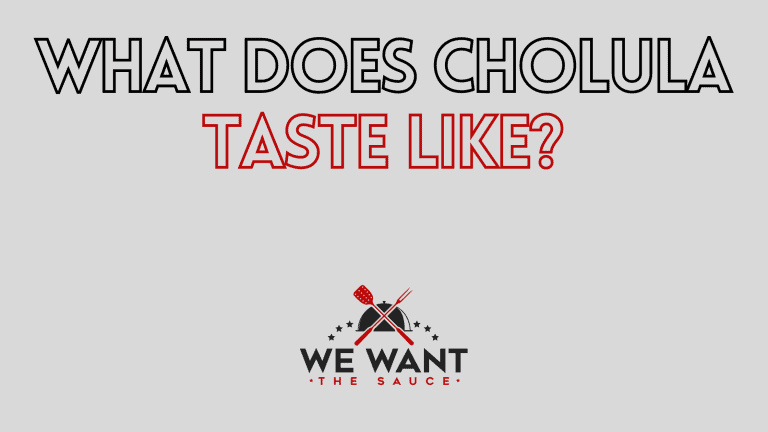 Are you contemplating buying, or trying Cholula but are not sure whether you will like it? Want to know what it tastes like before you bite the bullet? Besides, this is a hot sauce after all. Here is what you want to know.

So, what does Cholula taste like? Cholula has a sweet, complex flavor and mildly spicy taste. While it is rich in flavor, it is not considered to be as spicy as other hot sauces on the market. It is also quite runny in consistency.

A sauce that provides a lot without needing to use too much.

But how hot is this sauce, particularly in comparison to other hot sauces on the market, and what should you eat it with?

How Hot Is Cholula Hot Sauce?

Now, this is a very good measurement for the pungency (spiciness or “heat”) of chili peppers.

Besides, the Scoville scale is a mathematically driven measurement that all spicy foods can be measured by.

And in doing so, Cholula comes out considerably weaker than a lot of the spiciest chillis out there.

As such, Cholula is not going to blow your head off like some other sauces out there.

So if that is what you are specifically looking for, you may want to try something else.

That being said, that’s what makes Cholula so great and likely why it is such a popular sauce.

It is delicious, versatile, and pretty much everyone can consume it without objecting to it being too spicy!

Is Cholula Hotter Than Tabasco?

Cholula is not hotter than Tabasco. In fact, it is considered to be about half as spicy on the Scoville scale.

Which Is Hotter Sriracha Or Cholula?

Sriracha and Cholula are comparatively quite similar in terms of spice. Depending on the brand and recipe, Sriracha can be either less spicy or spicier; it goes both ways.

So, you will need to check the brand of Sriracha first and foremost.

Huy Fong, perhaps the most popular brand of Sriracha averages at around 1000-2500 units on the Scoville scale, while Cholula comes in at 1000-2000.

So you can see how one sauce may be hotter than the offer, given circumstances and context.

This is why you will also likely see the differing opinions online, or when discussing with other hot sauce consumers and/or connoisseurs!

What Is Cholula Best On?

Cholula is a very versatile sauce and you can use it on a never-ending list of foods and recipes. Although, it tends to work best in burgers and sandwiches, with chicken, or as a dipping sauce for pizza.

Here are some other great uses for this particular hot sauce:

Either way, this is the kind of sauce you can add to pretty much any food that needs sauce!

Cholula had the perfect balance of spice and flavor.

Well, at least according to this taste test featured on Insider.com.

So it was up against quite a few delicious and widely loved sauces.

It must be doing something right!

And perhaps the best thing about Cholula is that it is so versatile and not overly spicy.

So do give it a try.

And experiment with it.

You may be surprised at some of the foods you pair it with and that end up working out so well!

Just know how to open it properly first – that’s your first challenge.