If you’re looking for a new hot sauce, then you’ll soon realize that Cholula and Franks are some of the most commonly found and popular brands. But how different are they? Can you use them interchangeably or will you need to opt for one over the other? Well, here is all you are going to want to know.

So, what is the difference between Cholula vs Franks? Cholula is spicier than Franks. It also provides more of a fresh, rich, smoky flavor compared to the subtle buttery flavor of Franks. However, they are both relatively thick sauces in terms of consistency and are both hot sauces that can be used quite liberally.

These certainly are not the same type of sauce (even if they fall in the same hot sauce category).

That being said, they certainly do share some overlap which is not the same for all other hot sauces on the market.

But let us now explore their differences in greater detail.

That way, you should be able to find what sauce is right, for you.

What Is The Difference Between Cholula And Franks?

The main differences between Cholula and Franks are the ingredients they are made from, the resulting flavor profiles, and the different variations/options available to you.

Let us now run through each one.

The ingredient lists of Cholula and Franks are actually quite different.

Here is the full ingredient list for Cholula sauce, for reference:

And now, here is the ingredient list of Franks:

So you can see right away different peppers are used.

Cholula is centered around the Arbol & Piquin peppers, whereas Franks is based upon aged cayenne peppers.

From there, we can see that Cholula uses a vinegar blend, compared to the singular distilled vinegar of Franks, and the use of spices compared to garlic.

Lastly, Cholula uses a stabilizer in the form of Xantham Gum – something that Franks does not do.

Unsurprisingly, these two sauces do not taste the same.

Cholula has a rich, mellow, and somewhat smoky flavor.

It has notes of onion and other spices too.

Franks, on the other hand, has a very light buttery undertone. It has a little tanginess to go with the heat but the flavor profile is not considered as strong.

Cholula is actually a reddish-orange in color, compared to the deeper red of Franks.

While this doesn’t impact much other than visually, it’s a means of differentiating them on a plate side by side!

The Cholula brand is instantly recognizable by its wooden cap lid.

But the bottle is also designed with a particular dispenser, which helps to use an appropriate amount of the sauce with each use and prevents the flooding of food.

Franks on the other hand comes in more of a classic style bottle. You do need to be a little more mindful and careful when pouring.

They are the classics and the most widely used, after all.

At the same time, these are the sauces that are commonly referred to when talking about the brands.

That being said, there are other products in the range.

Each of which offers something a little different in terms of heat and flavor.

The variations available for each one can be found below

Can You Substitute Cholula For Franks?

You could substitute Cholula for Franks (and vice versa), but just consider that this is not a direct replacement. You should expect different flavors and spiciness, depending on the variation purchased or used.

Now, whether or not Cholula or Franks can substitute in for one another is going to depend a lot on your preferences, and your dish.

Cholula on the other hand is generally a lot more versatile.

You can use it with pretty much anything, and it tends to work well.

Which Is Hotter Cholula Or Franks?

Cholula is generally spicier than Franks. According to the brands, the original Cholula product has a Scoville heat rating of between 1000 – 2000, whereas the original Franks RedHot measures at around 450.

Now a quick primer on the Scoville scale. This is the statistical measurement of the spiciness or heat. It is mostly used with chilis/pepper and is based on the concentration of capsaicinoids.

In other words, it’s a standard that is used to compare heat.

And hot sauce brands have adopted this scale and measurement, which is provided in Scoville Heat Units (SHU), by the way.

Now, as expected, the higher the SHU, the spicier a chili/pepper/sauce is.

Next, we have to consider that most chilis/peppers and sauces are given an SHU range.

This is because not every chili/pepper or sauce is the same.

There can be a variance in terms of heat.

And that’s because chilis can range in spice, depending on factors such as where they are grown, the growing conditions, how and when they were stored, etc.

Nevertheless, the manufacturers have worked out a way to keep their sauces within a particular range.

And for each brand, Cholula is typically the spicier of the two.

But remember those variations we discussed earlier?

Let us consider the SHU scores of those:

Even then Cholula seems to come out on top.

Although, many of Franks variations are new products and their Scoville scores have not been publically announced.

So these are just estimations based on the descriptions given by the manufacturer.

Just bear that in mind.

Nevertheless, what we do know for sure is that the original Franks measures at around 450. At least half the score of the original Cholula.

Cholula and Franks; two hot sauces that certainly share similar characteristics but differ quite dramatically all at the same time.

So, while you could substitute one in for the other, you shouldn’t expect a like-for-like replacement.

And chances are, you will have a favorite if you were to taste test them.

So, the only thing left to do is purchase a bottle of both and try them for yourself. 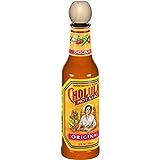 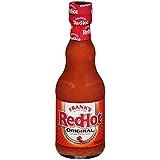 See what you personally prefer.

There’s no one right option – some consumers prefer Cholula, others Franks.

But where will you fall?

Only time will tell.

Wondering about how other hot sauces compare too? Check out my other guides below: