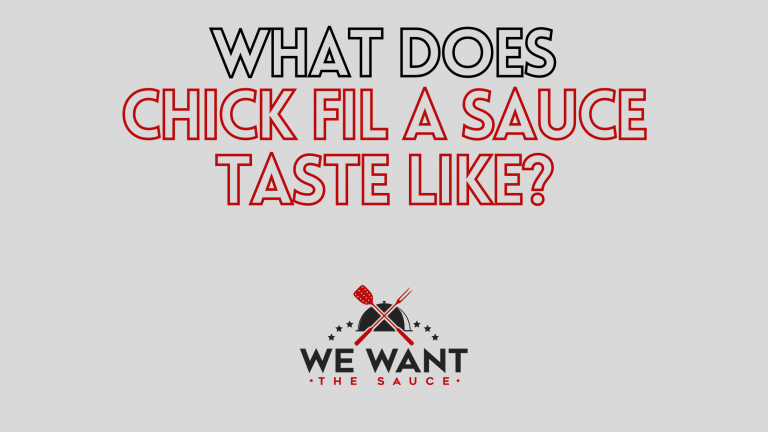 Considering adding Chick Fil A Sauce to your chicken sandwich? Wondering whether you should dip your potato waffle fries in this particular dipping sauce? Not sure you like it so would rather get an idea of what to expect before you do? Completely understandable. Well, here is what you will want to know.

You won’t be disappointed.

In fact, it’s the kind of sauce that everybody tends to love.

Besides, it’s one of the signature sauces of one of the largest American fast food restaurant chains.

If it wasn’t so good, I’m sure they would have given this honorable title to another sauce…

What Is Chick Fil A Sauce Made Of?

The original recipe of Chick Fil A Sauce contains soybean oil, sugar, bbq sauce, vinegar among a host of other herbs and spices.

In fact, the complete ingredient list of the official Chick Fil A sauce sold in-store is as follows:

And while you certainly should buy your Chick Fil A sauce through the store or authorized sellers, you may even find variations on this sauce.

And here is why.

There are several DIY recipes out there!

We’ll be going over one of the best imitation recipes out there in a future section – so watch out for it.

What you need to know is that official Chick Fil A sauce includes those ingredients, but homemade recipes can differ.

That will cause a variation in the taste and flavor.

The main alternative to Chick Fil A sauce is Great Value Chicken Dipping Sauce from Walmart. This appears to be most similar in terms of taste and texture.

So much so that the Great Value Chicken Dipping Sauce has been described as a “knock-off” and a “copycat” version.

Other than that, any sauce that has its basis in honey bbq and mayonnaise is going to taste pretty similar.

So, sauces like Mayocue, Mayochup, or homemade equivalents are perhaps the best next thing.

What Do You Eat Chick Fil A Sauce With?

Chick Fil A sauce is marketed as a dipping sauce first and foremost. So, it is ideal for pairing with Chick Fil A waffle fries, nuggets, and strips.

Other than this, you can always add this flavorsome sauce to your sandwich – either one purchased at Chick Fil A, one you made yourself, or another sandwich outlet.

Then there are other combinations you may not have even considered.

Burgers, pizza, tacos, with chips. These all work particularly well too.

Don’t judge but it even tastes pretty good with sushi!

Besides, this sauce is now widely available as you will soon discover in the next section.

So, you will be able to try this sauce out with various foods should you so wish.

Can You Buy Chick Fil A Sauce?

You can buy Chick Fil A Sauce, either directly at their restaurant chains, or at select participating retail stores. Equally, you can purchase this sauce online.

Due to its popularity, you can actually buy 8 oz bottles directly on the Chick Fil A website.

And just like any item on the menu, you can order it for pickup or delivery.

So you can go about your order as normal and just throw it in at the end.

If you’re in a Chick Fil A restaurant, all you need to do is ask and they should be able to sell it to you.

Alongside Chick Fil A directly, the company has teamed up with large grocery chains too.

You can purchase bottles of this sauce at:

And better yet, the company has now made the sauce available at Amazon!

So, you can get it shipped out to you on Prime.

How To Make Your Own Chick Fil A Sauce

Making your own Chick Fil A sauce is pretty simple and only requires a handful of ingredients. While it will not taste exactly like the real thing, it’s not too far away.

Alternatively, you can opt for Honey BBQ Sweet Baby rays instead of standard barbecue sauce. This will also allow you to forgo using real honey.

I was almost embarrassed to write those instructions.

You just whisk it all together.

When it comes to refrigeration, I would also stick it in an airtight container.

A bottle, jar, or even Tupperware can work here.

That way, you can look to keep your sauce for much longer – even if you don’t use it up right away.

Just monitor it for degradation though.

You don’t want to keep this for too long.

And you can always make more, fresh when you need it.

And if you can, then you can imagine Chick Fil A sauce.

But perhaps better yet, try it.

Get a small packet with your next meal and dip your potato waffle fries into it.

That’s the only real way to tell.

But from there, you can always buy a bigger bottle and then use it more liberally.

That’s what tends to happen, at least.

Besides, this is a popular sauce – it wouldn’t have become the signature sauce and be sold in larger bottles, if not.