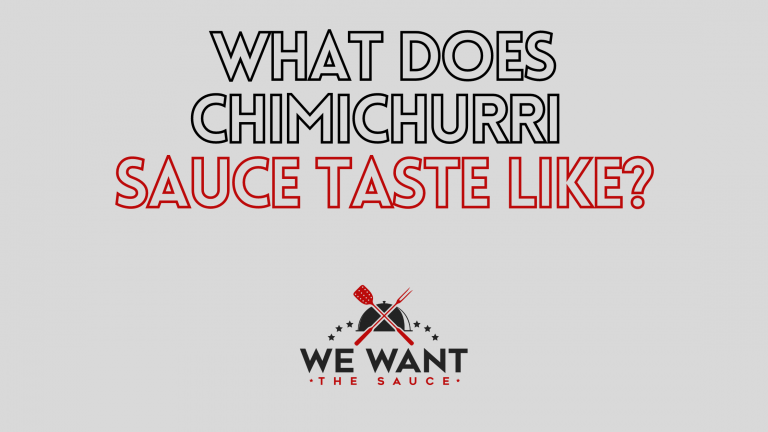 Chimichurri Sauce – that’s a mouthful in itself. It’s certainly not the easiest to say. But what does this sauce typically taste like? What can you expect if you decide to give it a try? Here is what you will want to know.

So, what does Chimichurri sauce taste like? Chimichurri Sauce has a herby and fragrant taste – provided by the various herbs in the recipe. It also provides a slight kick from the inclusion of peppers, although it is not considered hot. Either way, this is quite a strong and earthy sauce, relatively oily in texture, that you do not need too much of.

Perhaps not what you were expecting.

But it really is vibrant – in color and in flavor.

And you’ll soon see why this is the case.

Besides, this is a green-herb dominant sauce.

But what exactly is included in the recipe and what does this mean for food pairings and combinations.

What Is Chimichurri Sauce Made Of?

Of course, that’s just the most typical version.

In reality, it varies quite dramatically.

It depends on the recipe; some chefs and cooks decide to take it in all different directions.

Whether it’s introducing new herbs or changing the ratios of herbs.

It also depends if it’s made from scratch or store-bought.

Take this best-selling brand on Amazon for instance.

It has very favorable reviews.

One, in particular, caught my eye: “This is the real deal. Excellent with a mild citrusy flavor to it.”

But at the same time, the soybean and pure cane sugar and natural flavors likely make this particular sauce a little different.

At least compared to the other popular brand on Amazon. This time it includes the likes of lemon juice and paprika.

These are of course just examples.

But they do demonstrate the individual variances.

And, ultimately, you will need to find a recipe or brand that aligns with your preferences.

Is Chimichurri Hot And Spicy?

Chimichurri Sauce has an element of spice, but it is not typically considered hot. You should taste the peppers, although it should not overpower the herbaceous flavors. At least in traditional recipes.

That being said, some Chimichurri sauce can be spicy.

Usually, that’s not intentional, however.

It’s usually when it’s made from scratch and the balance of ingredients is off.

Or you are eating a variation of the sauce and from a recipe that favors the hotter notes.

That should be the exception rather than the norm, however.

What Do You Eat Chimichurri Sauce With?

Chimichurri Sauce is versatile and can be used with a number of different dishes and food pairings. Although, being an Argentian sauce first and foremost, is most commonly used as a marinade on steak and meats like chicken, lamb, and pork.

Grilled steak that is.

But it certainly has its other uses.

It’s great with seafood and vegetables, or as a dip for bread, too.

In fact, some people even decide to be a bit more experimental with it.

You’ll sometimes see it used in pasta and rice dishes and salads too.

I’ve even seen it drizzled over egg on toast, added to tacos, mixed with mayonnaise, and eaten with pizza!

Where To Get Chimichurri Sauce

Your main options for getting your hands on Chimichurri sauce are either making it yourself or buying a store-bought option. Online is typically best.

Unless you go to an Argentian supermarket, this can be a little tricky to find.

The truth is not all grocery stores sell it.

That’s where the likes of Amazon come in.

But that’s certainly not for everyone.

And, all is not lost.

Besides, you can make your own relatively quickly and with just a few ingredients.

Here’s a simple recipe you can follow that will take you just 5-10 minutes:

And if you add it to an airtight container and place it in the fridge, it should last for 2-3 weeks.

The vinegar helps preserve it, you see.

So there you have it. The interestingly alluring Chimichurri Sauce.

It’s certainly worth a try, and once you’ve tasted it for the first time, you’ll know why it’s so popular and so versatile.

But up until then, just imagine it as a variation of pesto with a twist.

That’s perhaps the best way to describe it really.

Whether you like the sound of that is going to come down to your personal preferences.

But regardless of how enthusiastic you are to try it – start with a small amount.

A little goes a long way.