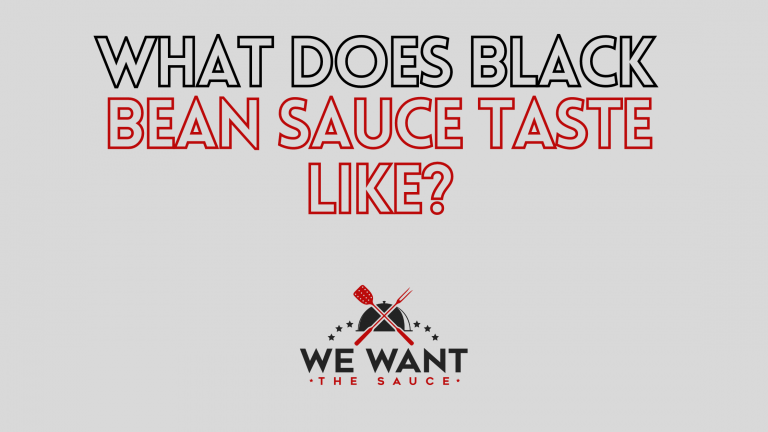 Black bean sauce; doesn’t sound like it’s going to be particularly appetizing, nor does it give you an insight into what to expect. Here is what you will want to know.

So, what does black bean sauce taste like? Black bean sauce is bold and rich in flavor – you don’t need to use much. You can expect a sweet and salty taste that also has hints of garlic and ginger – giving it a little kick and an element of spice.

Perhaps that’s enough for you to give it a try.

But it’s a popular sauce in Chinese cooking that is often added to dishes long before they get to the table.

But to get a better understanding of its flavor, it helps to know what ingredients make up this sauce.

Let’s find out before looking at ideal pairings and possible substitutions.

What Is Black Bean Sauce Made Of?

Black Bean sauce, (Douchi in Chinese) is made of fermented, salt-preserved black soya beans. Aside from this, oil, garlic, ginger, soy sauce, sugar, and salt are also included in the recipe.

Of course, what you will find exactly, and the ratio of each ingredient will vary by recipe or brand.

Although, this sauce is typically quite thick in consistency and pungent flavor.

All this comes through the fermentation of the black soybeans.

At first, the black soybeans are boiled.

They are then inoculated using a mold spore and then they are left to dry in the sun.

Afterward, they are stored – either dry or in brine.

This is what gives the sauce its subtle, deeply savory taste.

What Is Black Bean Sauce Similar To?

Black bean sauce is most similar to hoisin sauce, miso paste, tianmian sauce, oyster sauce teriyaki sauce, and soy sauce. All of which are salty, savory and slightly sweet in flavor.

Essentially, black bean sauce is very similar to any other fermented, or soy-based sauce.

Oyster sauce appears to be the exception here, but it is still quite similar in regards to the taste.

What Does Black Bean Sauce Go With?

Black bean sauce goes well with a number of different dishes, it is a very versatile sauce after all. Although, it is most popularly used with stir-fries, rice-based dishes, and vegetables.

In reality, this sauce is used in the cooking of many of the most popular Chinese dishes.

Besides, it provides bold flavor and can quickly enhance any food that it is paired with.

Nevertheless, there are some general recommendations when working with it.

They are as follows:

At least to me.

It’s not for everyone.

But here’s the thing.

Chances are if you have ever eaten at a Chinese restaurant or had a Chinese takeaway, you’ve eaten black bean sauce before.

And failing that, if you have ever eaten soy-based sauces before – it’s not too far away from most of these either.

It’s perhaps most close to hoisin sauce than others – but you get the idea here.

A little goes a long way.

And if you are cooking with it – you can always add more – but you cannot take away.

So, whether you decide to buy some pre-made black bean sauce from Amazon, or make some of your own from a simple online recipe, be sure to start with a small amount.