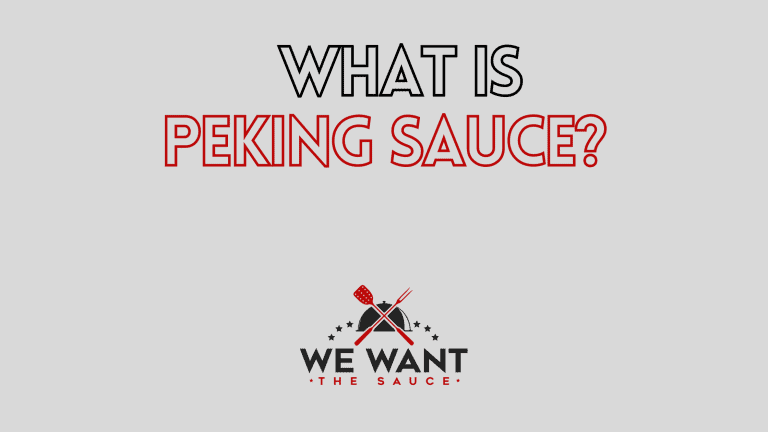 Stumbled across Peking sauce in a recipe, on a menu, or when browsing the sauce aisle? Wondering what it is, what it tastes like, and how to best use it? You’ve come to the right place. Here is what you will want to know.

So, what is Peking sauce? Peking sauce is a rich, sweet, and spicy dark sauce made from soya beans, sugar, vinegar, and garlic among other herbs and spices. It’s popular in Asian cuisine, most often used as a dipping sauce or a marinade for grilled meats, particularly duck.

In fact, many people compare it to barbecue sauce in taste and consistency.

But it does pack a bit of spice too.

It’s also often confused with hoisin sauce too – but more on that later.

But at least this can help you get a bit of an understanding of what it’s like.

And when looking at the ingredients full list of ingredients for this sauce, you can get an even better idea.

So let’s now do that!

What Is Peking Sauce Made Of?

Traditional Peking sauce is made of fermented soybean (in the form of a paste), flour, sugar, and salt. Although there are variations on the recipe and different brands often include different herbs and spices to differentiate their sauce.

Common additions typically involve chili and garlic, along with distilled vinegar too.

Although, if you are looking for authentic and original Peking sauce; like how it was made in the region of Beijing, China – then it should really be made with Tian Mian Jiang – a fermented yellow soybean paste.

Nevertheless, while this sauce does have a common base – it is certainly one that has been adapted and modified over time.

Various cooks introduce new herbs and spices routinely into their Peking sauces as a means of altering the flavors to suit different dishes and appetites.

Peking sauce is sweet, spicy while also being relatively salty. Imagine it like a sweet and sour type of taste. It is relatively thick and dark in consistency too.

Of course, this is based on the more traditional recipe.

The taste will differ and depend on where you go somewhat and the ingredients that are used.

It can differ by restaurant, cook, or brand.

Some Peking sauces will be sweeter, others saltier, for instance.

Nevertheless, it is the sweet, salt, and spice that this sauce is known for and these are the kind of flavors you should expect, in some capacity.

What’s The Difference Between Hoisin Sauce And Peking Sauce?

The difference between Hoisin sauce and Peking sauce is one of flavor; recipes do typically contain different ingredients.

However, one thing to note here is that the terms often get used interchangeably.

Rightly or wrongly, this is just something to be aware of.

Probably because the base of the sauces are so similar and they share very similar ingredients.

What Does Peking Sauce Go Well With?

Peking sauce goes best with certain meats, with duck and pork being popular favorites. It is typically used as a marinade on the meat. At the same time, Peking sauce is a great dipping sauce for spring pancakes too.

That being said, Peking sauce also works great with:

Where To Get Peking Sauce

There are generally three different options for getting or trying Peking sauce; buying a bottle from a store, making your own from scratch, or ordering it at a Chinese restaurant.

Thankfully, many stores stock Peking sauce; although you may need to navigate to the Asian food section to find it.

And then there is online.

If you take a look over at Amazon – you should be able to find a bottle for purchase.

Just consider that this sometimes goes by a different name, like this brand on Amazon, for instance.

You’ll also notice the ingredients are a little different and it was designed for duck recipes in mind.

Making your own is also relatively simple, as we shall soon see below.

Plus, you can be creative here and try adding different spices to get a taste and flavor you like.

And then there are restaurants.

Often, restaurants will pair popular dishes, such as Duck pancakes with the sauce, and provide you with a serving with your meal.

Some restaurants may even sell the sauce separately.

How To Make Your Own Peking Sauce

And when it’s done you should have quite a thick sauce that still runs, a little.

You can also store this in your fridge for 3-7 days – just be sure to do so in an airtight container!

And that is Peking sauce in a nutshell.

So give it a try the next time you visit a Chinese restaurant, purchase, or make your own if you like the sound of it.

Sweet and sour flavors just work so well together.

Add in a little bit of spice and it’s no surprise that this sauce has been permanently paired with duck.

And its also no surprise that this is a popular order and favorite in Chinese cuisine.