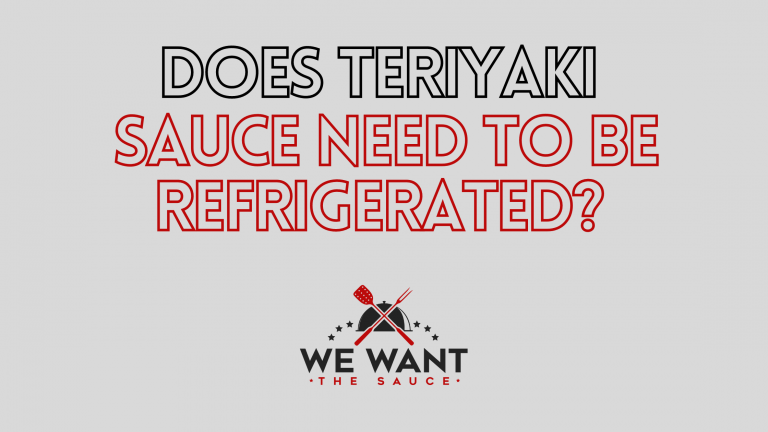 So you’ve got a bottle of Teriyaki sauce and you don’t quite know how to store it. Does it need to go in the fridge, or can it be left in a cupboard? What about after opening? Well thankfully, I’ve spent some time researching the condiment to find out. Here is what you should know.

Perhaps not the answer you were expecting.

Especially when you often read or hear that this sauce does indeed need refrigeration.

Well, the truth is; it doesn’t – at least in order to remain safe to consume.

And in regards to flavor, well, storing outside of the fridge should not have an impact in the immediate future.

As long as it is stored appropriately, of course.

Which we will look at shortly

But first; why does it not need refrigeration?!

Why Does Teriyaki Sauce Not Need Refrigeration

Teriyaki sauce does not need to be refrigerated due to the ingredients contained in the recipe. None of which go off at warmer, room temperatures.

And what better way than to break down the recipe of a Teriyaki sauce.

Now that’s from one of the most popular brands on the market – Kikkomans.

You’re likely familiar with it or even have a bottle you’re keen on storing.

And as you can see, the main ingredients are Soy sauce, wine, and vinegar.

Well, for starters soy sauce does not require refrigeration.

Wine and vinegar are natural preservers too.

Which means it can be kept out.

Now of course, you may not have a branded option.

You may actually have made a Teriyaki sauce from scratch.

In that case, you may need to refrigerate it.

Depending on the ingredients used.

But if it is mostly soy sauce, spices, and vinegar; the choice should be all yours.

Can Teriyaki Sauce Be Left Out Overnight?

Teriyaki sauce might be able to be left out overnight – although depending on the recipe, the environment, where and how it was left, it may not be as flavorsome or fresh.

If it’s a sealed bottle – it should be perfectly fine to leave it out overnight.

Chances are, you will not even notice a difference.

If however, the sauce was on a plate or somehow exposed to the air – chances are the color, texture and aroma may have started to change.

In such an instance, you may want to consider not eating it and throwing it away.

It shouldn’t make you sick but there is no guarantee it will be as flavorsome, at the very least appetizing, then when freshly out of the bottle.

How Long Is Teriyaki Sauce Good For Once Opened?

Teriyaki sauce is generally good for between 2-12 months when opened – it depends on how it was stored and if it was sealed properly.

One thing is for sure and that is Teriyaki sauce comes with a best by date.

That simply means, there is an optimal time to eat and consume it.

After this date, the sauce can be consumed – but it may not taste as good.

May being the important word here.

If it is stored properly, you shouldn’t notice a difference.

Thankfully, Teriyaki sauce has a long shelf life and it does not spoil easily like other sauces are known for.

Here are some general rules for storage:

How Do You Know If Teriyaki Sauce Has Gone Bad?

How it looks, how it smells, and how it tastes; those are the three ways to tell if a Teriyaki sauce has gone bad.

But you’ll want to inspect it visually first.

Don’t go for the taste test right off the bat!

Nonetheless and thankfully, Teriyaki sauce does not really spoil.

It almost degrades in quality slowly.

So when it comes to ‘going bad’ – you’ll likely notice over time.

You may simply get to the point that you no longer enjoy the flavor.

And at that stage, you can always get a new bottle – if not before.

Besides, it’s not too expensive.

The only caveat here being cross-contamination.

If something manages to get into the sauce, it can actually cause it to go off.

It could begin growing bacteria – an odor could ensue and so could the presence of mold.

In such instances, you simply have to throw it away.

But this only generally happens if food or other forms of contamination get into the bottle.

Teriyaki sauce does not need to be refrigerated.

Although, you may consider it for flavor preservation.

At least for the long term.

Ultimately it kind of depends on how long you intend to keep the sauce.

If it’s anytime beyond a year, then refrigeration does seem plausible.

But even then, it’s generally long-lasting and unlikely to turn.

So long as you keep it airtight and in a dry, dark place away from sunlight.

Does Kikkoman Teriyaki Sauce Need To Be Refrigerated?

Kikkoman Teriyaki sauce does not need to be refrigerated, although the company does recommend it for flavor preservation. Generally, the sauce will retain its flavor for several months longer if you do decide to keep it in the fridge.