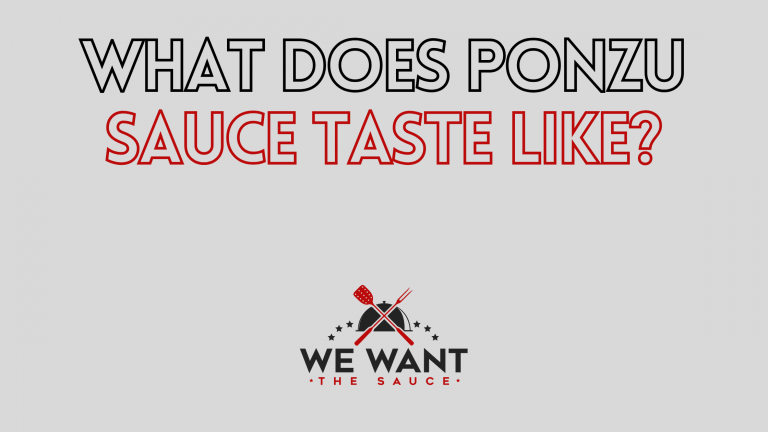 You’ve seen a bottle of Ponzu sauce and are considering giving it a try. Perhaps a recipe even calls for it. But what kind of flavor does it have and what can you expect from it? Here is what you will want to know.

So, what does Ponzu sauce taste like? Ponzu sauce is salty, sweet, and sour in taste. It is somewhat tangy and zingy in flavor – similar to what you would expect from a vinaigrette. These flavors are due to the combination of citrus juice, mirin (rice wine), and often soy sauce in the recipe. It is a thin and runny sauce in consistency.

It’s certainly a refreshing sauce, for sure.

And it will also set your taste buds alight.

Besides, it hits on all of the primary types of taste.

And, when we analyze the name a little more closely, it all begins to make sense.

Ponzu is of course a Japanese word.

But, the “Pon” part was borrowed from the Dutch word “Pons”- meaning punch (a beverage made from fruit juice).

It has to do with the Dutch East India Company – a trading company in the 17th century.

While you’re not here for a history lesson, it does help to illustrate what you can expect from it.

Besides, the name really is an explanation of the taste.

What Is Ponzu Sauce Made Of?

But of course, this is just the traditional recipe.

And while you can follow a recipe that follows this way of cooking and production, in reality, commercial Ponzu (that you can buy in glass jars at the grocery store or online) is a little different.

Besides, most commercial Ponzu will include Soy Sauce.

Although this is perhaps the most authentic brand you can buy from Amazon.

What Is Ponzu Sauce Similar To?

Ponzu sauce is not too similar to any other sauce; there are not really any direct substitutes. It’s quite unique in that way. That being said, you can make an equivalent sauce of your own by mixing certain ingredients together.

Perhaps the quickest alternative to make from home would be a sauce that’s equal parts soy sauce and lemon juice.

While this will not taste the same, it does provide similar citrus-based, sweet, salty, and savory flavors all in one.

Ponzu sauce does not taste like Soy Sauce. Soy sauce is much more rich and salty in taste. Whereas Ponzu is generally much lighter, sweeter, and tangier. Plus, Ponzu will provide citrus notes.

Although, both sauces will vary in flavor depending on the recipe or brand that you use.

For instance, Ponzu will taste most different depending on the citrus fruit used. Lemon, orange, or lime can be used; all of which adding a different element to the sauce.

Soy Sauce on the other hand often comes in different varieties.

Perhaps the most commonly known ones are light, thick, and dark soy sauce.

Each has its own uses and tastes.

Dark Soy sauce, for instance, is darker, thicker, and richer in flavor. It has a darkening effect on food too. Sometimes, dark soy sauce is even sweeter if sugar or molasses have been used.

They provide something different.

In fact, Ponzu does not cook in high heat very well, unlike Soy sauce.

So, Ponzu should mostly be used as a dipping sauce or serving sauce, whereas Soy sauce can doesn’t necessarily need to be.

What Do You Eat Ponzu Sauce With?

Ponzu is traditionally served with Shabu-Shabu and other simmered dishes as a dipping sauce. However, it is also often eaten and paired with grilled meats, seafood, noodles, and vegetables.

Due to its salty, tangy, and sweet flavor, Ponzu can enhance a wide variety of foods.

It can be used as a marinade, although as previously mentioned, it is not good to cook with – it should be added at the end.

A few splashes in a cooked soup, stew, or stir fry are other great uses for this sauce.

And like a dipping sauce, raw vegetables and sushi are great uses too!

Sushi is perhaps my personal favorite.

But it does not just need to be limited to Japanese dishes either.

Here are some other ideas to try:

Ponzu sauce is certainly one to try.

That’s what you can expect.

It’s no real surprise that it is one of Japan’s favored condiments.

Just do not cook with it.

Use it after, and start with a few drops at a time.

Ponzu sauce does not taste fishy, despite traditional recipes including the simmering of fish flakes in the process. This is because they are removed, and the addition of citrus fruit instead provides a sweet tangy flavor. Although you can expect some saltiness.