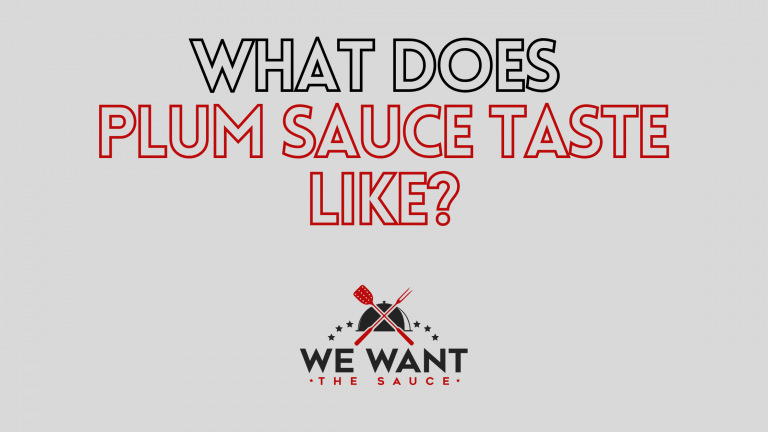 You’ve heard or seen Plum sauce and you’re keen on trying it. Or are you? Maybe you’re not sure what it tastes like and whether or not to try it. Well today, we will be clearing that up. This is what you can expect from this often, quite vibrant sauce.

So, what does Plum sauce taste like? Plum sauce is sweet with a little tartness in taste. It is quite thick in consistency although is still smooth in texture. Due to the inclusion of ginger and chillis, plum sauce also has somewhat of a kick – although it is not considered spicy by most.

Do not get it confused with sweet and sour sauce.

And that is often a lot more sweet and tart.

Plum sauce is a lot more subtle, but it does have similar flavors nonetheless.

And it’s all due to the ingredients that make it.

Let us see now, before turning to what you should eat it with to get the most of this popular delightful condiment!

What Is Plum Sauce Made Of?

Traditional recipes of plum sauce are only made with a few simple ingredients; plums, vinegar, sugar, salt, ginger, and chili peppers. Sometimes though, plums are not used and other fruits are used instead. Peach, pineapple, or apricot are perhaps the most commonly used alternatives.

You read that right.

Sometimes plum sauce does not contain any plum at all!

But that is the exception rather than the norm.

There is a reason why it is called plum sauce and that’s because it usually centers around it.

But not many other ingredients are used.

The only exception here being unique recipes or even particular store-bought brands.

Sometimes they add other seasonings and spices to the mix, or other ingredients to help preserve it better.

And sometimes the ingredient expands further.

Take this popular brand on Amazon.

Tomatoes, soybeans, onion, pepper to name all but a few.

They’re not usually in traditional recipes, but they are certainly included in one of the most sought-after pre-prepared options on the market!

What Do You Eat Plum Sauce With?

Plum sauce is best served as a dipping sauce for deep-fried dishes. Spring rolls, deep-fried chicken balls, and dumplings are popular uses of this sauce.

Nevertheless, it doesn’t have to stop there.

This sauce is quite versatile and you can use it with many other foods too.

In fact, many Cantonese dishes use it quite liberally.

Here are some of the other common uses:

What Is The Best Plum Sauce?

The best plum sauce is subjective and will depend not only on personal preferences but how it is going to be used. It depends on the dish – and whether it is being used as a dipping sauce or as a finishing/basting sauce.

That being said, there are certainly some qualities to look for when comparing brands or recipes.

Can you imagine the flavors – does this sound like something you would personally enjoy?

In fact, some plum sauces are a little sweeter than others.

Maybe you want that, maybe you don’t.

Then there is the consistency.

Are you looking for the typical rich, thick sauce or perhaps something a little runnier?

Then you may have health considerations or preferences like you want a sauce with no artificial ingredients.

Nevertheless, in a taste test, this is my personal favorite that I buy from Amazon.

It’s a complex sauce that, at least in my opinion, has the perfect balance between sweet and tanginess.

And you won’t be surprised when you see the brand name. A household name in the condiment aisle.

Nevertheless, if you really want a plum sauce to meet your specific needs, then why not make it.

As we shall now see below.

How Do You Make Your Own Plum Sauce?

Making your own plum sauce is straightforward and you only need a handful of ingredients.

In a nutshell, all you need to do is boil, puree and re-simmer your ingredients until you get a thick plum sauce.

Let us now look at it below.

Those are the two primary notes you should expect from plum sauce.

And it makes it so versatile.

So whether you want to use it to dip, marinade, or baste, you’ll be sure to add some great flavor to your food!