Have you been introduced to Tapatio sauce? Perhaps it was recommended to you, maybe you’ve seen it somewhere such as in the condiment aisle at the grocery store. Nevertheless, you likely want to know what it is and what you can expect from it. Well, here is all you are going to want to know.

So, what is Tapatio sauce? Tapatio sauce is a brand of hot sauce made from red peppers. It was created in 1971 in California. It has a Scoville Heat score of  3,000 SHU, which makes it moderately hot compared to other similar hot sauce condiments. It is popular in Mexican American communities and cuisine.

And if you are wondering about the branding, “Tapatio” is the name given to people from Guadalajara, Jalisco.

That’s a city in Mexico, by the way.

It’s likely where the creator and original founder, Jose-Luis Saavedra, Sr. descends from.

Nevertheless, this is a sauce that has always been made in the United States.

Even if it is now sold all over the world, including the UK.

But regardless of the history, you likely want to know what this sauce is made of, what it tastes like, and what you can expect when it comes to heat.

Besides, that’s what’s most important, right?

So let’s delve into it!

What Is Tapatio Hot Sauce Made Of?

As you can see, the ingredient list is very limited.

And even then, it’s relatively vague.

For instance, the Tapatio brand does not specify what type of “red peppers” they use.

This is unlike other brands, such as Tobasco peppers in Tobasco sauce, for instance.

Although, due to the heat of this sauce, it is likely the brand uses peppers that are a little hotter.

Other than this, it’s important to note that water is the primary ingredient.

This gives Tapatio a somewhat runny consistency and thinner texture than a hot sauce like Sriracha.

Although the thickener Xanthan gum does prevent this sauce from running completely. It also acts as a stabilizer to ensure the sauce does not separate.

From there, “spices” are another unspecified ingredient; which one is used appears to be another company secret!

While this sauce does contain salt (and quite a bit of it), it does not use as much as other hot sauce brands comparatively.

And while no vinegar is used in the recipe, the Acetic Acid provides the tangy tartness hot sauces are known for.

Tapatio has a rich peppery flavor and a nice kick of heat (which is not considered overpowering) You can taste garlic notes, and it has somewhat vinegary and tangy undertones due to the Acetic Acid.

As such, Tapatio is a versatile hot sauce. It pairs very well with most foods and can be used as an everyday sauce.

Eggs, pizza, burgers, meats (such as steak, or chicken), fish, salads, tacos, burritos… you can enjoy this sauce with quite literally, anything.

And due to its flavor profile, it does not dominate or take over other flavors of food. It’s supplementary.

Tapatio hot sauce is considered to be somewhat spicy – or medium in heat. It is considered spicier than RedHot Original Cayenne Sauce, Tabasco, and Sriracha.

This is a hot sauce that you’ll certainly notice. It instantly warms your mouth and does intensify the more you use it, but you should find that the heat does not linger for too long.

For this reason, the heat profile gets mixed reviews among consumers.

Some consumers mention that you only need a small amount (a couple of drops) due to the flavors and heat this sauce provides.

Although, others consumers who enjoy hot sauce mention that they use this sauce more liberally.

It generally depends on how hot you like your sauce, and your personal taste preferences.

But what about the Scoville scale, I hear you cry!

Well, on this measurement of spiciness (or heat), Tapatio typically scores around 3,000 SHU (Scoville Heat Units)

Now compared to other hot sauces, you can see where it falls:

Tapatio is a versatile hot sauce.

In many ways, it does not reinvent the wheel, but it also does offer something a little different.

It’s absolutely worth a try if you like your hot sauce.

So give it a try and see for yourself! ⬇️ 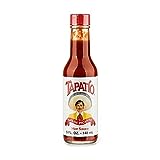 But if you are wondering how it compares with the other popular hot sauce, Cholula, then read this.

Is Tapatio Similar To Tabasco?

Which Is Hotter Sriracha Or Tapatio?

Want to learn more about Mexican sauces? Then my other guides may be of interest: