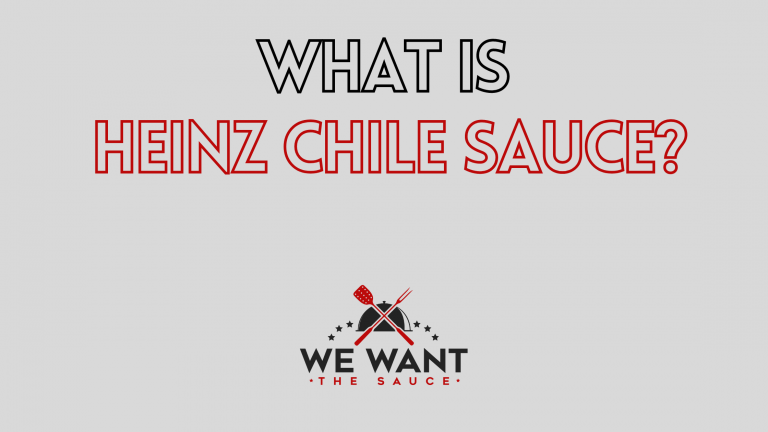 We all know Heinz for their ketchup. Besides, it really is one of the best out there. But what about the chili sauce? What is it exactly, what does it taste like and what can you expect. Let’s find out, shall we!

So, what is Heinz chili sauce? Heinz chili sauce is a tomato-based condiment with a slight warming kick. It’s similar in many ways to Heinz tomato ketchup yet includes aromatic spices in its recipe. Heinz chili sauce can be used as a dipping sauce, added to other sauces, or even used during cooking.

It’s absolutely worth a try – particularly if you are fond of regular Heinz tomato ketchup and tend to like sauces with an extra kick.

But how different is this sauce from the original and classic Heinz tomato ketchup?

You’ll know to find out below.

What Is The Difference Between Heinz Chili Sauce And Ketchup?

The main difference between Heinz chili sauce and Heinz ketchup is in the recipe; the chili sauce contains onions as opposed to onion powder, and the aromatic spices are a little different too – giving it a slightly more spicy kick.

In fact, if we compare the ingredient list side-by-side you will see for yourself:

The ingredients for Heinz Chili sauce are as follows:

The ingredients for regular Heinz ketchup are as follows:

So there really is not that much difference.

In fact, some customers even report that these sauces do not taste that different altogether.

But there is a slight, subtle difference.

But what this does mean is that the chili sauce is far from spicy.

While it does have a little extra heat, it’s very mild when compared to other hot sauces.

Perhaps the best thing you can do is try some and see for yourself.

You can pick it up for a great price over at Amazon.

In fact, the primary ingredient in Heinz chili sauce is vine-ripened tomatoes. Sweet chili sauce does not include tomatoes at all.

And it also contains vinegar too; something you will also not see in sweet chili sauce.

Even the consistency is entirely different.

Heinz chili is somewhat thick in consistency, whereas sweet chili sauce is notorious for being quite runny and thin.

All in all, these are sauces that look and taste completely different.

What Is Heinz Chili Sauce Used For?

Heinz chili sauce is often used as a dipping sauce for fries, to add flavor to burgers and sandwiches, or mixed in with other sauces (like spaghetti sauce) to eat with meatballs and pasta dishes.

It’s actually a very versatile sauce that goes with a lot of things.

Whether you decide to eat it on its own, or pair it with other sauces.

Some customers report eating it with meatloaf, others with pork chops.

Then there is the ability to mix it in with sour cream to make a salsa.

Or what about soups?

The reality is, this is a sauce that can be used whenever there’s a need for a sauce!

That’s one way to imagine it.

In many ways, it’s very similar but it does give a slight, subtle warming kick – just as you would expect with any chili sauce.

But this is not going to blow your head off like other chili sauces.

It’s not hot nor spicy.

While that’s not necessarily a bad thing; just consider that if you like your Sriracha or Tabasco – it’s not a direct substitute, nor was it ever designed to be!