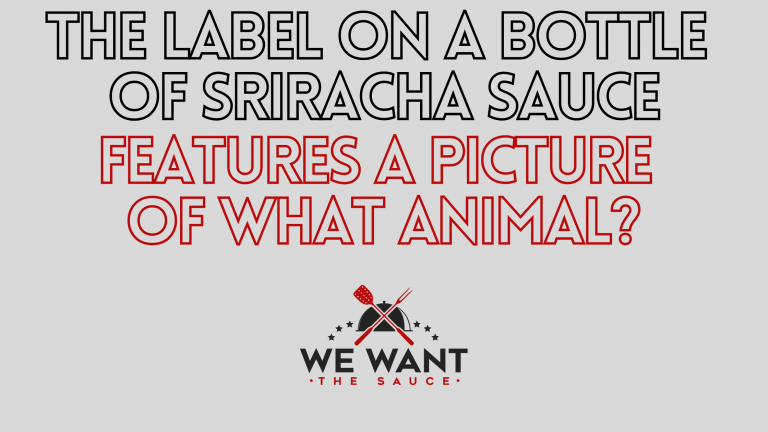 You find yourself in a fiercely heated argument about what animal is displayed on the bottle of Sriracha. You’re convinced. Perhaps you’ve seen something others have not. Or have you? So what animal actually is it? Let’s find out!

So, what animal is on the label of Sriracha sauce? The animal on a bottle of Huy Fong Sriracha Sauce is a Rooster (or male chicken). This symbolizes and represents the astonishing personal story of the brand founder, David Tran.

In fact, Huy Fong is widely recognized and considered to be the best (or at least, the most popular brand Sriracha sauce).

Not only because of the Rooster, but because of that unique green lid you only find on this particular condiment.

But why on earth is there a chicken on the bottle and why does it feature so heavily?!

Why Do Sriracha Bottles Have Chickens On Them?

Sriracha bottles have chickens (Roosters) in reference to the brand founder, David Tran. The year he was born was the year of the Rooster in the Chinese Zodiac lunar calendar and this also represents and symbolizes his personal story and lifelong work.

And that’s because according to the Chinese zodiac, Roosters are serious in their work and tenacious; no matter how difficult something is, they will not give up.

This actually mirrors the life of David Tran very closely.

He founded Huy Fong Foods, but he overcame great adversity to do so and build it into the global business it is today.

David Tran was an immigrant, fleeing his native and communist Vietnam and getting to the United States following the Vietnam war.

And amazingly, the boat that transported him to the US was called the Huey Fong!

And since then, he has built a $60 billion-dollar company, literally from the ground up.

Not only was he deeply involved in the manufacturing, but he also marketed and transported his sauce around the US.

Take this quote from an interview he had with Inc:

So the Rooster has come to symbolize what David Tran has done and come to achieve.

It’s a fitting testament to the strength and tenacity of its founder.

So that settles that.

And there is a legitimate and astonishing reason why this male chicken is so prominently placed on the bottle.

It’s just quite astonishing that this sauce pairs so well with chicken, too.